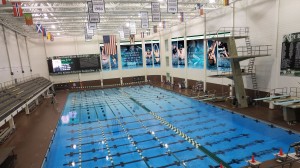 The Heritage Project will complete the Champions Campaign by adding eye catching and emotional graphics to the Robert F. Busbey Natatorium and will feature our team’s heritage, alumni, coaches, community, history and more.

Everyone who passes by, peeks in, visits or swims in the pool should leave with a feeling of “wow” ! Alumni, especially, who see the timeline, heritage corner or Ninth Lane pictures up close should leave with a little bit of a lump in their throat or a tug at their heart as they emotionally re-connect with teammates, coaches and events and the opportunities that in some way developed because of their time with the CSU Swimming and Diving Team.

The concept graphics below are based on feedback from swimmers and divers, both men and women, who were connected with Bob Busbey and Wally Morton over the last 50 years. The Heritage Team looks forward to feedback from CSU swimming and diving alumni, coaches, current team members and friends as these images are refined during the final design, fabrication and installation phases of the Heritage Project – the third and final phase of the Champions Campaign.

You can download a .pdf file for a higher quality view here:  Heritage Concept Graphics with Descriptions  (11MB .pdf file).  Or you can view the descriptions and  images below. 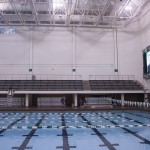 THE NINTH LANE – on the south wall opposite the rec center – will feature large graphics visible from the rec center or pool deck. Pictures of teams, alumni, coaches and events since 1932 will be visible when viewed up close because of the “mosaic-like” graphics on the lower portion of the panels.

When viewed from up close, observers will see individual pictures. 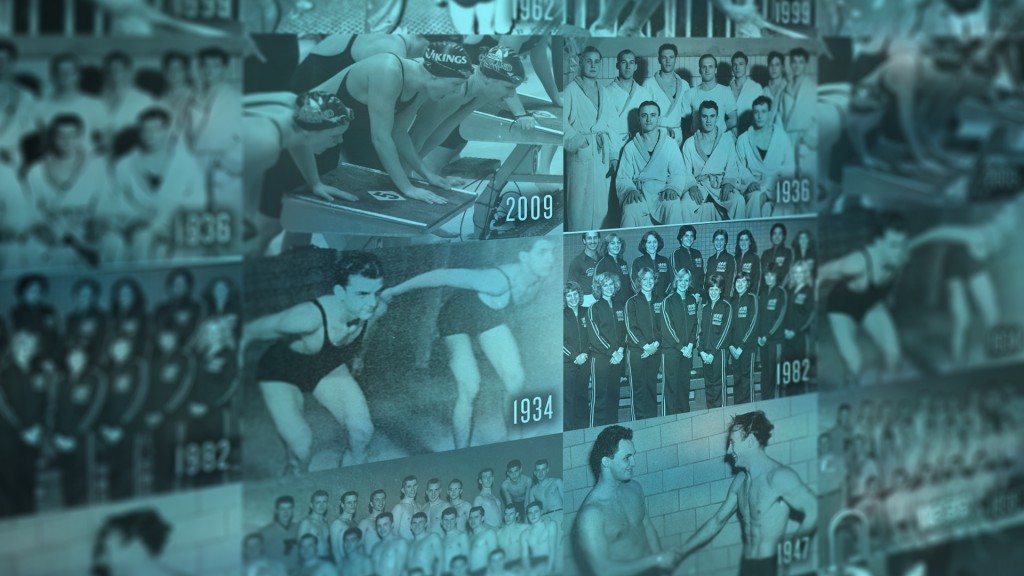 This is the view of the Ninth Lane from the Rec Center or pool deck near the north wall. 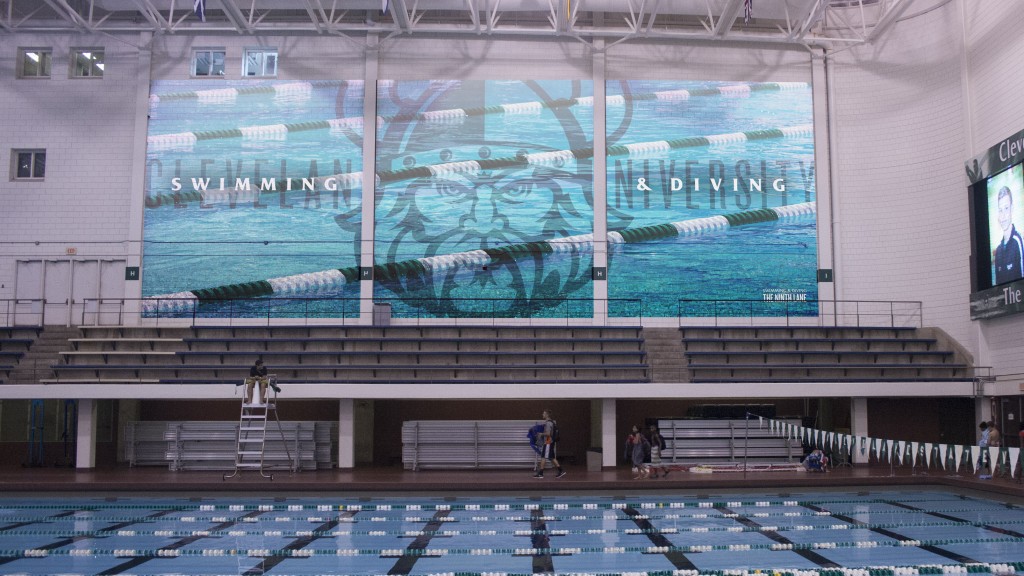 This is a rendering of the view from the top of the south bleachers. 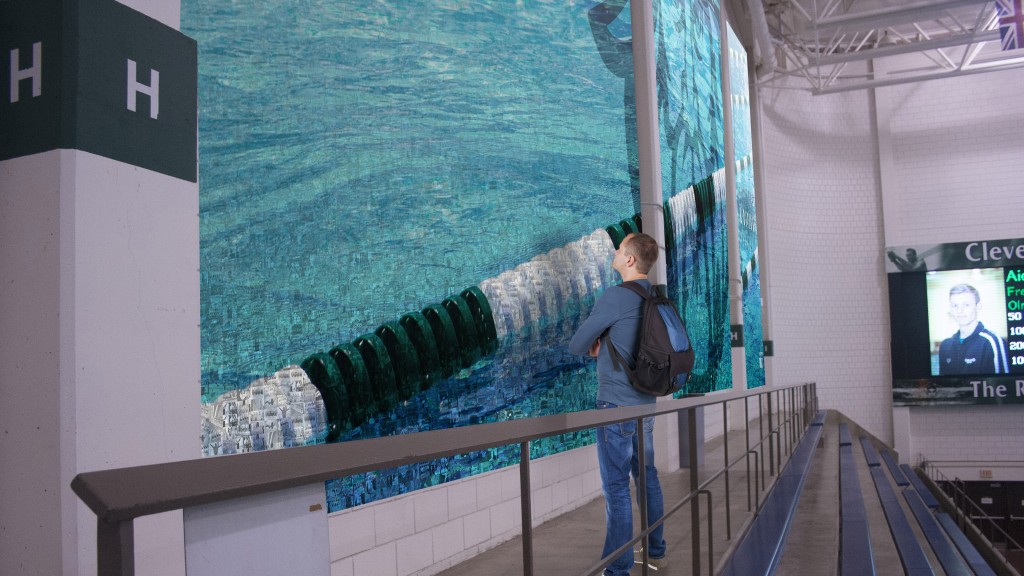 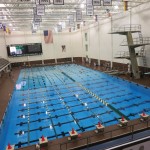 BANNERS – on the west and north walls – will feature large scale graphics visible from the bleachers, pool decks and from the south wall windows. These graphics will honor Bob Busbey and Wally Morton and will add excitement and color to the pool. These banners, heavy vinyl or light-weight cloth, could be mounted to the walls or on stand-offs to add a sense of motion to the graphics. 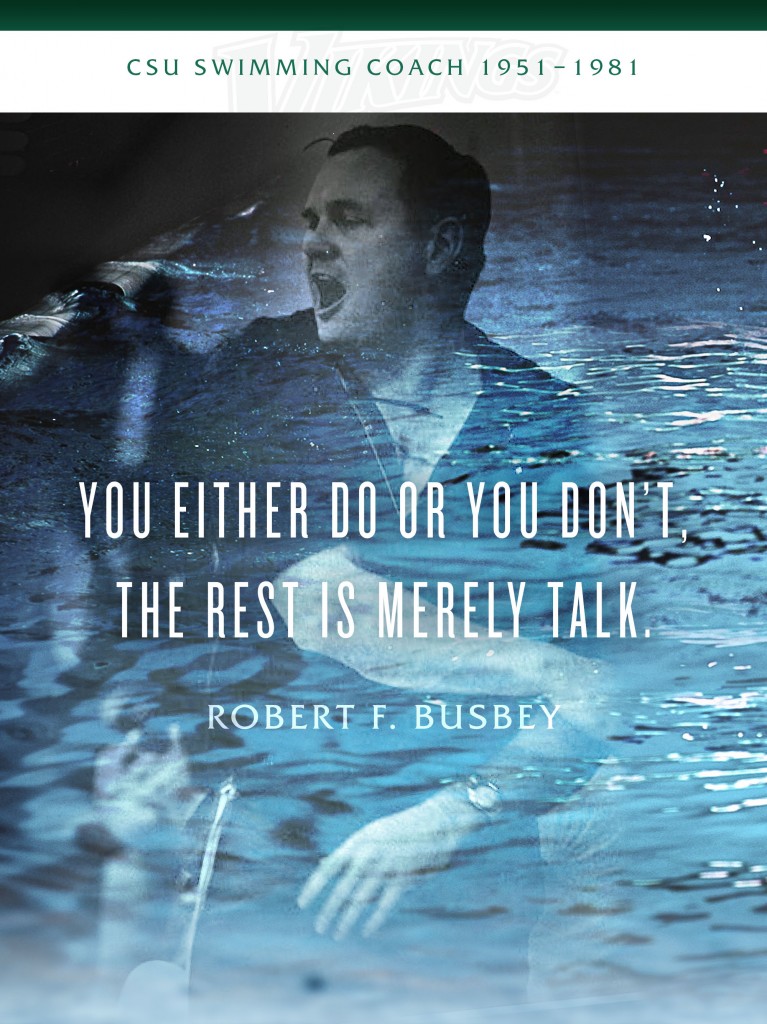 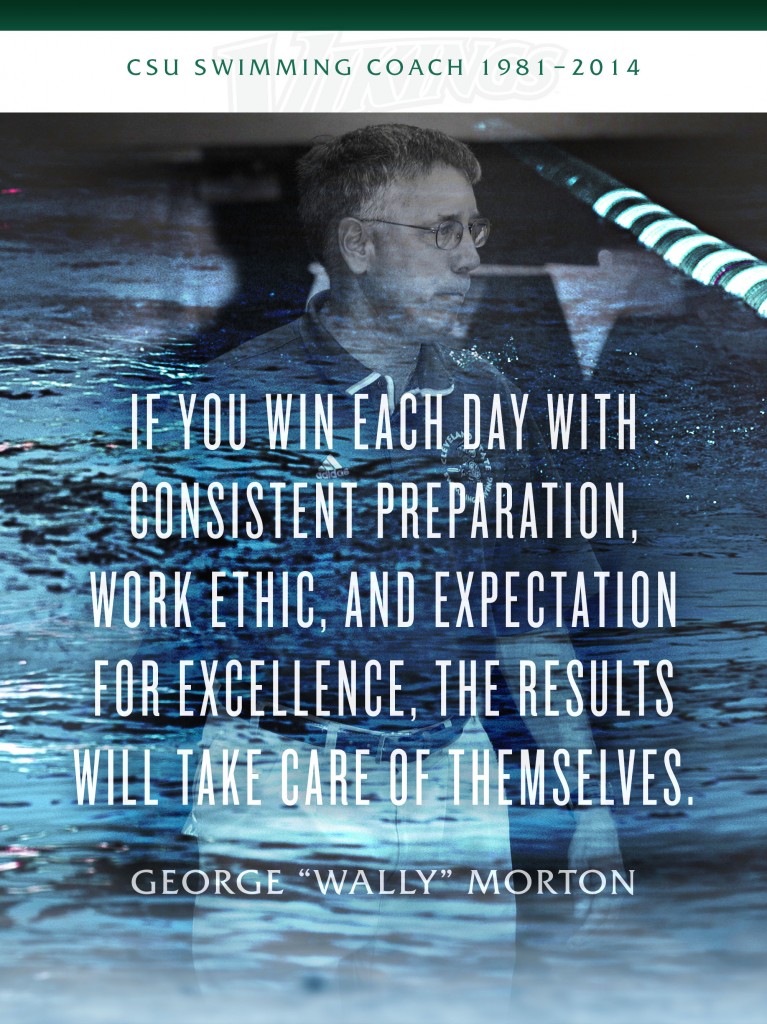 The concept would be to utilize a range of action shots on either side of Bob and Wally.

This is what visitors would when viewed from the eastern bleachers 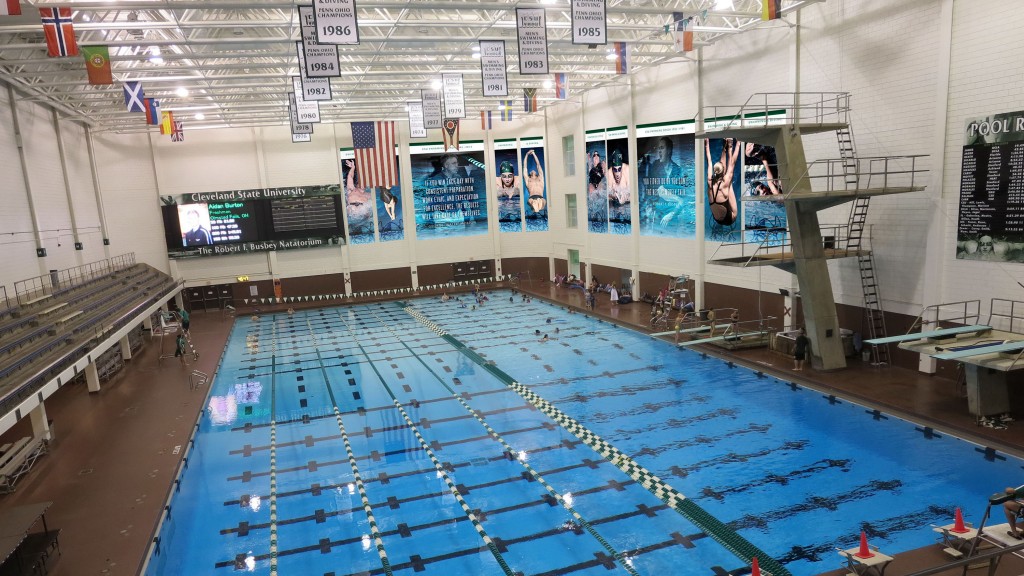 From the south bleachers it would look like this.

This is a view from the pool deck on the north side of the pool. 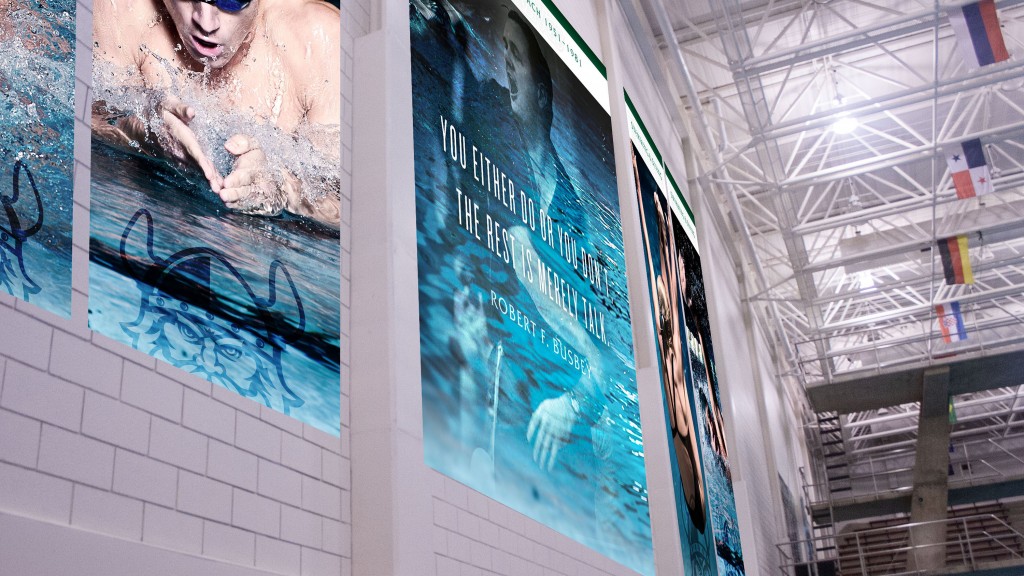 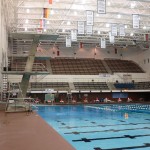 TIMELINE – at the base of the east bleachers – will feature people and events in the history of the program from 1932 through 2039. They will capture key events since the first Fenn team and continue through the 75th anniversary of Cleveland State University in 2039.

Many additional dates, people and events will be available on the CSU Swimming and Diving Heritage Website. – www.csuvikings-swim-dive-heritage.com.

The timeline would extend from 1932 through 2039-the date picked because it is 25 years from the launch of the Heritage Website and will coincide with the CSU 75th anniversary.

These concept drawing sere created to share the vision of the timeline.  The events shown on the detailed mockup below are simply to show size and scale – just placeholders for now.  THE HERITAGE COMMITTEE NEEDS YOUR HELP- we’re looking for historically correct inputs and suggestions for entries on the time line.  For example, we wouldn’t repeat coaches names each year, just their first year as head coach.  The “milestones” below were taken from media guides, photo albums and other records.  YOU can make a difference in what gets posted to the wall; just send your corrections or additions to heritage@csu-swimming-diving.com. 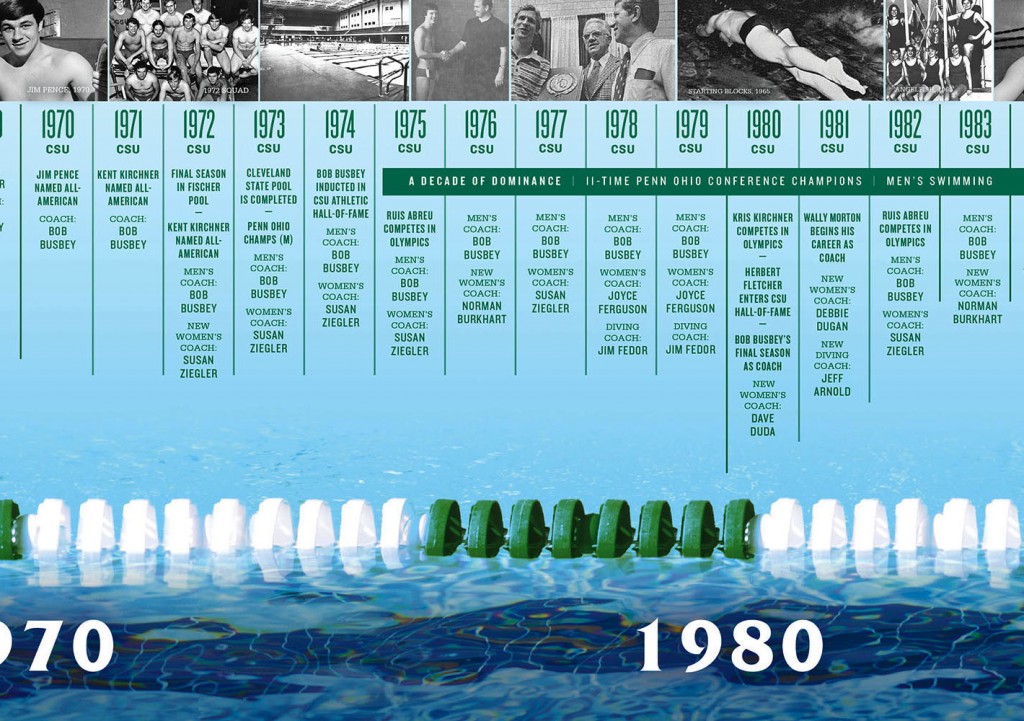 Here is a view of the timeline from the foot of the eastern bleachers. 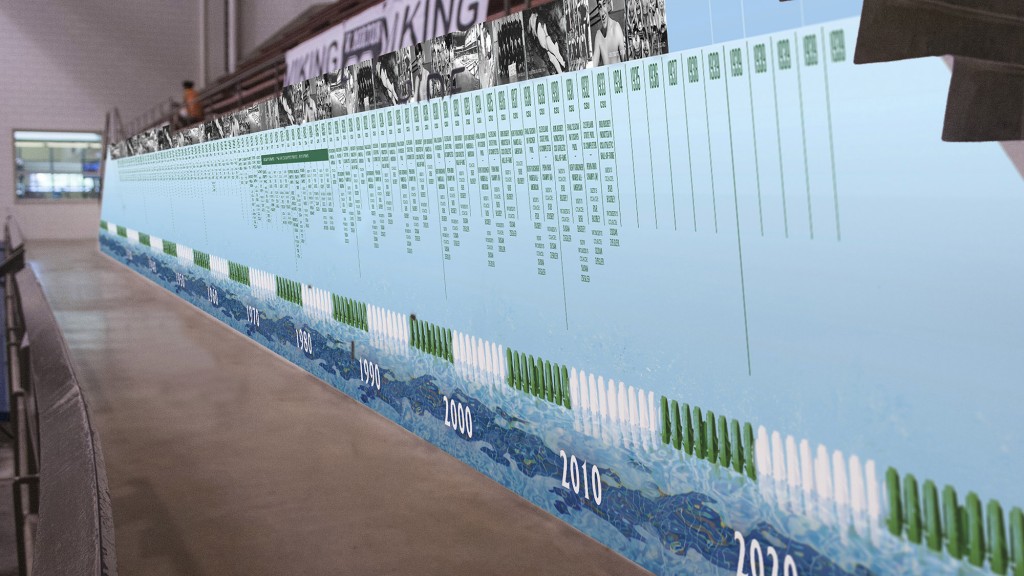 COMMUNITY CORNER – located on the north end of the east bleachers – will be visible from the rec center as well as the south bleachers. These graphics will capture community involvement in the pool and will focus on the many local, regional and international groups who have used and made history in The Robert F. Busbey Natatorium. The concept below is one option being considered for the Community Corner. 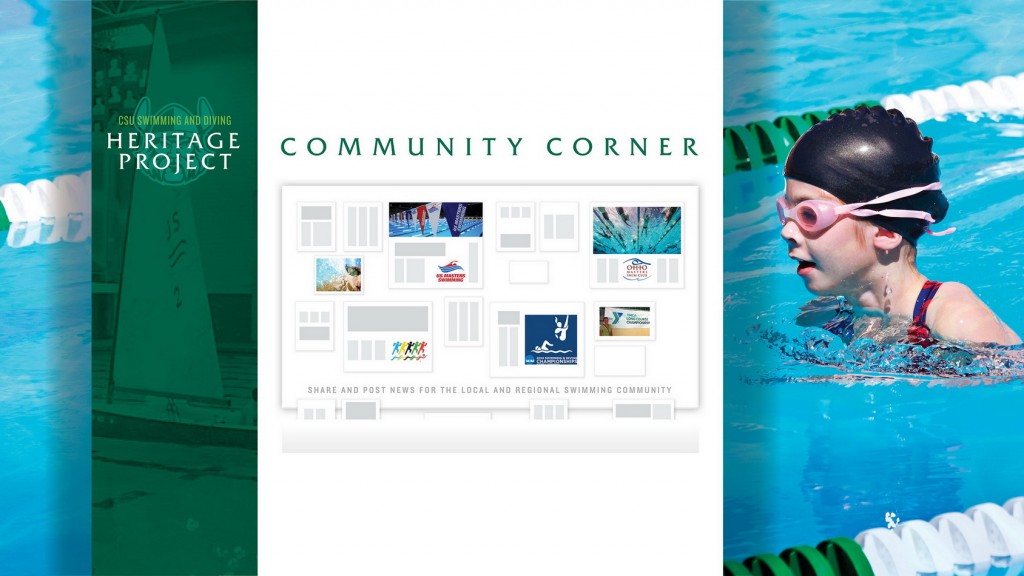 When initially designed and installed, we will leave some space for additional entries.  Other options might include an actual bulletin board as part of the corner. 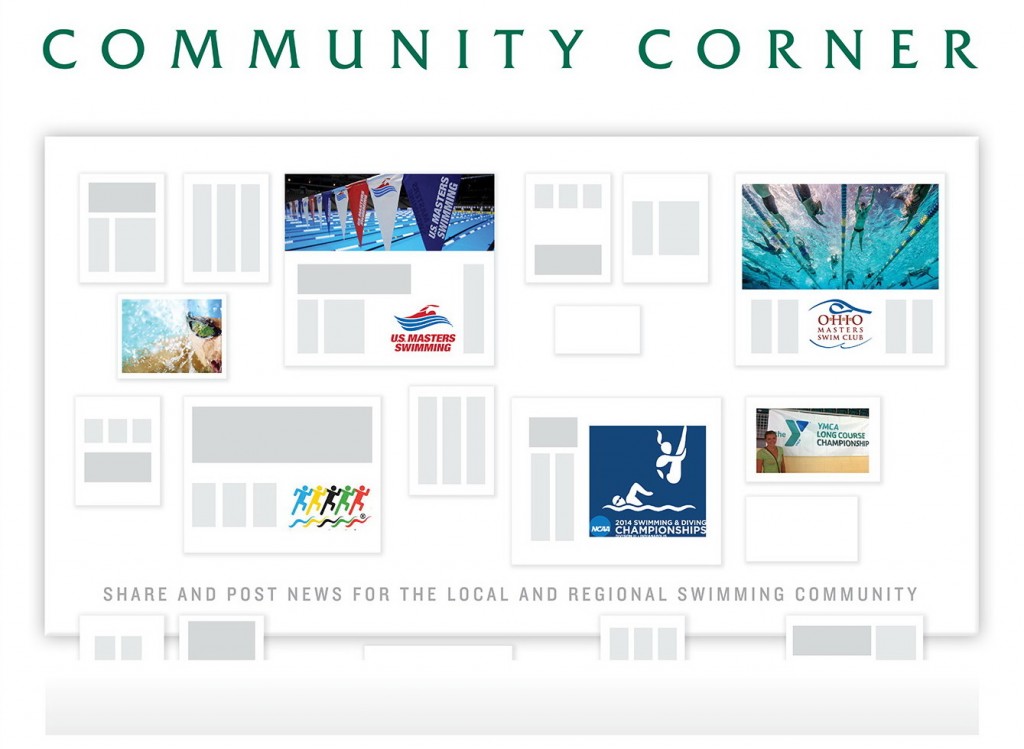 This is the view of the Community Corner from the south bleachers.  Note the watchful eye of Magnus between the two new Record Boards and visibility from the Rec Center. 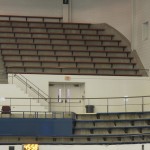 HERITAGE CORNER – located on north east corner of the second floor of the pool between the two main entrances – will be the home of a large kiosk. The attention-getting graphics housing the computer running an interactive touch-sensitive screen will honor the Program’s heritage.

A second kiosk will be located in the hallway and will be mounted on the bulletin board next to the ticket window. 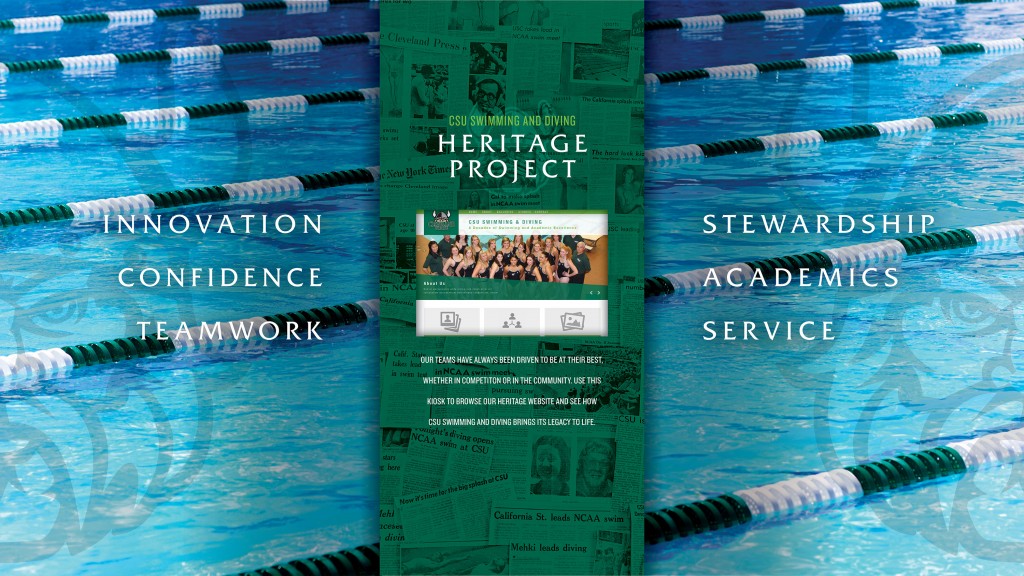 From the western end of the pool the Heritage Corner will appear as a boundary for the Timeline, offsetting the Community Corner on the north. 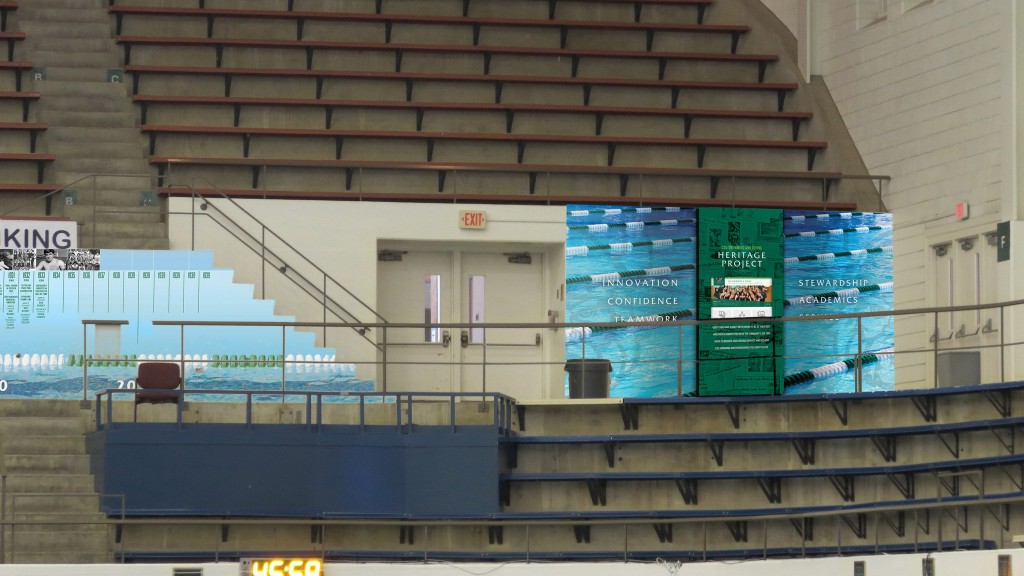 Notice the 3-dimensional raised panel over the touch-enabled screen in this view from the south east corner of the pool just inside the “tunnel” entrance. This panel, approximately 6″-8″ deep and 4′ wide, provides both dimensionality and security. 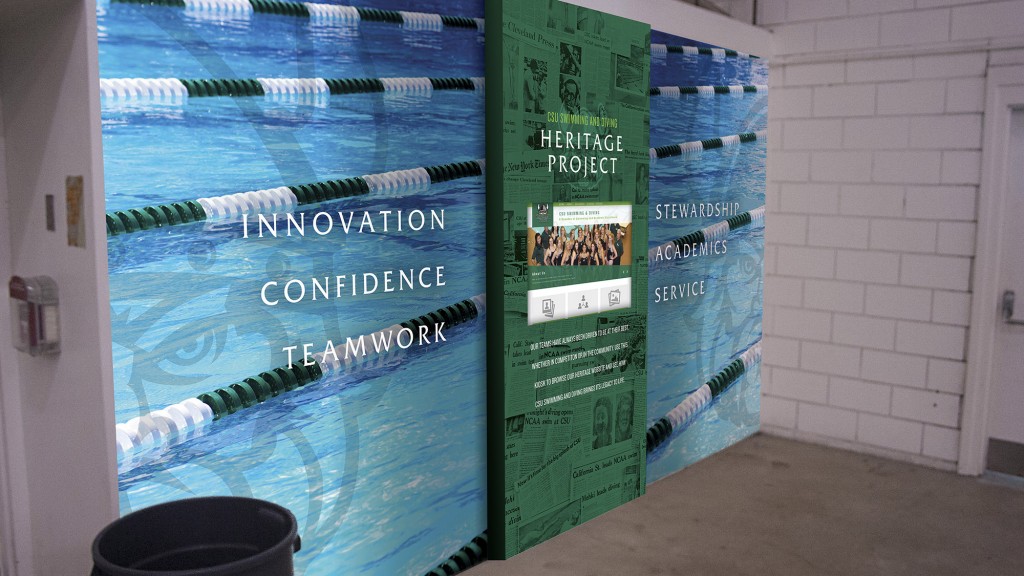 Here is view of the Community Corner, Timeline and Heritage Corner viewed from the western pool deck. 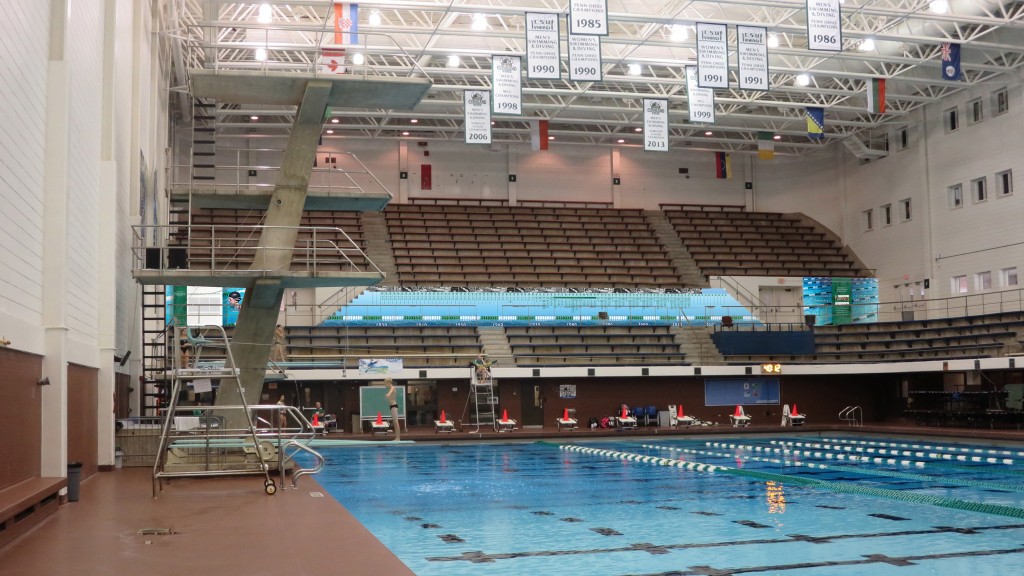 ADDITIONAL GRAPHICS will be developed for the men’s and women’s locker room, door wraps, graphics for the “tunnel” and other areas in and around the pool deck.

Check out the concepts for the Tunnel Entrance to the pool – and let us know YOUR preference: Bright Blue or Dark Cool ?